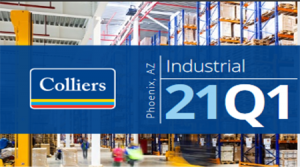 Approximately 17.8 million square feet of new industrial space is currently under construction, setting a record for building activity. More projects are in the pipeline and expected to start construction later this year. Of this space, 85 percent is being developed in the Northwest and Southwest submarket clusters. Sarival Logistics Center, a 1.15-million-square-foot distribution center at Loop 303 and Bethany Home Road is one of the largest projects started this year. 10 West Commerce Park in Buckeye began construction of a new 862,000-square-foot distribution facility. The Northwest submarket delivered the most new inventory during first quarter, completing 2.0-million-square-feet. During the past 12 months this area has delivered more than 5.7-million-square-feet of new industrial space.

Net absorption during the first three months reached 5.1-million-square-feet. This figure is equivalent to 38 percent of the total net absorption posted in all of 2020, achieved in just the first quarter. This marked the second consecutive quarter when all five submarket clusters posted positive net absorption. Walmart committed to 1.2 square feet at Park 303 near Loop 303 and Glendale Avenue. Pepsi, the parent company of Gatorade, committed to expand by 750,000-square-feet near its current facility at Tolleson Corporate Park.

The vacancy rate at the end of March was 6.6 percent, down 80 basis points over-the-quarter and 110 basis points year-over-year. This is noteworthy, as the decline took place during a period when 2.9-million-square-feet of new inventory was completed. That new product came to market with just 39 percent vacancy. This illustrates the rapid drive for speculative development and the speed with which large blocks are being leased. The Northeast submarket area has the lowest vacancy rate at just 3.0 percent. The Southeast cluster and Airport Area experienced the largest declines in vacancy year-over-year, settling at 5.5 and 4.6 percent, respectively.

The combination of increasing rental rates and decline in vacancy has propelled the sales of industrial buildings. Investment sales volume during first quarter outpaced the first quarter of 2020 by 1.3 percent. However, it was down 26.1 percent compared to fourth quarter 2020. One of the largest sales involved a four-building, multi-tenant complex formerly known as The Lotus Project. The property contains 473,516-square-feet and sold for $91 million. During the first three months of this year, $831 million in sales volume was achieved. The median price per square foot for buildings sold in first quarter rose 5.83 percent to $127. Cap rates continued compressing to 6.2 percent.

New businesses and investors are racing to Phoenix, creating incredible demand. Vacancy of industrial space is expected to increase because of construction volume, but rental rates are expected to remain strong and increase through the remainder of the year.