The Santa Rita Ranch Specific Plan was first approved by the County in 1988 for 2,435-acres and up to 5,307 units. Stanley P. Abrams and Santa Rita Partnership were the applicants. Crown West acquired its portion known as Santa Rita Ranch III in 2013, a total of 182 acres and 330-lots being developed by Crown West.

In fact, these lots are so scenic that the builders are alternating homesites on the same streets, Wingert told us, “Santa Rita feels away from the city, yet is convenient to everything off Interstate 10 and minutes to major employers along Houghton, at the UA Tech Park, Davis Monthan Air Force Base and Raytheon.”

Crown West has already begun development of these first lots and anticipates the first builder models to be ready as early as year-end. These first homesites are 6,000-square-feet (50x120) while the next lots will be 60x120 going still higher into the foothills. Each phase has a private park, plenty of open space and walking and bike trails.

The amenities and being located in the highly desired Vail School District brings many families to Santa Rita, but there are also empty nesters and retirees looking for the convenience, “yet away from the city”.

Will White and John Carroll of Land Advisors Organization in Tucson negotiated for the seller with Richmond and Lennar.

White says, "The focus now is definitely on shovel ready lots that can be ready for 2018 and that is what we continue to see getting closed. The southeast has shown some great data over the past 12 months and builders are being responsive to this. We think there will be continued, strong momentum out of these existing projects and future ones on the way." 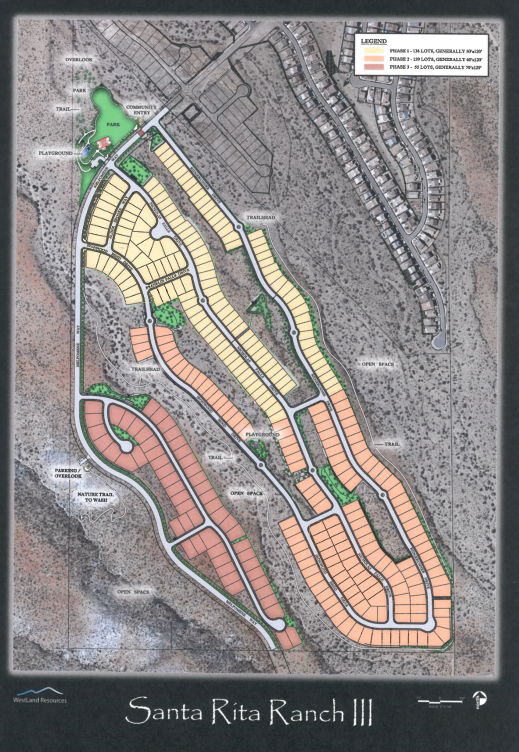